On November 29, 2019, Southwestern Baptist Theological Seminary terminated my employment. The documentation for what happened with my termination can be found here. I shared the gospel in the popular culture. My testimony encouraged people to see themselves as God defined them rather than accept the "born this way" myth so popular among gay activists. The Seminary did not want the attention brought by this issue. So I was fired for sharing the gospel.

This is demoralizing, but I am working in other areas that can present a positive gospel message to the culture. I wrote a play, Lady and the Girl, which premiered on December 6 in a soft launch in the Dallas-Fort Worth area. As you can see from this link, the theatrical piece brought the gospel message through a dramatic narrative of Mary Todd Lincoln and her friendship with the freed slave, Elizabeth Keckley. You can go to this link to see pictures of what we did, and to support this ministry:

While the termination from Southwestern disturbs me greatly, I am focusing my energy on new paths going forward. It would be an honor to have your support! Here is the cast of Lady and the Girl. We want to bring the show to African American churches for Black History Month and to Europe. God bless you all! 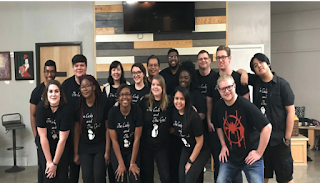 WHY CRITICAL RACE THEORY IS WRONG.

Critical race theory and intersectionality are wrong. I maintain this even though I advocate firmly for multicultural diversity. I have sustained attacks from both left and right. In fact, on Facebook calls for my firing came both from a left-wing person who accused me of racism for criticizing abortion and drag queen story hour, and from a right-wing person who accused me of doubting capitalism and sympathizing with left-wing social justice warriors.
To understand why critical race theory is wrong, I ask that you first break down how, as educators, we lead people from a classical curriculum to critical race theory.
Consider the most problematic quote I ever heard while teaching at Southwestern Baptist Theological Seminary: "You came here to teach Western civilization, not to teach multiculturalism." This insulted me beyond belief. It also reflected profound ignorance. Multiculturalism is part of Western civilization, starting with the quadrivium of ancient cultures that fed it: Greek, Roman, Hebrew, and Christian. Remember that other cultural and ethnic identities that arose in the development of the West gradually became additional components of an organic whole that accommodated and sprang from a great deal of cultural difference.
A classical curriculum involves teaching students about the foundational tensions among various cultural identities. So if we are objective and consistent classics and ethnic studies mirror each other (as long as we resist the political biases that impose a false right-wing or left-wing inflection on them, respectively.)
In a classical curriculum, you do not teach "critical thinking" or "worldview" to students. You teach students what happened and what great people have said. You provide them this content, drawing from the many different cultural sources that produced the history, literature, and ideas that interacted with each other in each era from antiquity to the present.
I believe, absolutely, that we have to teach students Greek and Roman texts, as well as Anglo-American, British, French, African-American, Mexican-American, Chinese-American, Brazilian, Moroccan, etc., texts. We show students what happened in the history of these groups. We let them enjoy the great aesthetical texts that each group has produced.
Critical race theory and even worse, intersectionality, are shockingly devoid of content. There is no substance there, simply a lot of generalizations and postures, and unchallenged postulations about the way different groups relate to each other. It is possible to be a committed critical race theorist without having read much African American literature or much literature from the European traditions that became "white" people groups.
To get an institution or a student constituency to critical race theory, you first have to get them from substantial content to theory; then you must get them to critical theory; then you get them to critical race theory and throw intersectionality on top of it.
I caution fellow conservatives that often the first warning signs of an encroaching critical race theory are not critical race theory texts, but rather a general fascination with theory devoid of content. You see, this is how this goes:
1. First, they eliminate history and literature from the curriculum. Students get only the barest and often weakest sense of what has happened in the past and what great people had to say about anything.
2. They replace content with abstract conversations that amount merely to generalized theories devoid of context and uprooted from any specifics.
3. Once students are immersed in theory without content, then the professor asks them to engage in critique (the "critical" part). Since the students have no base of content to inform their critiques, they draw critical postures from within themselves, which means they retreat more and more into a narcissistic exercise of analyzing their own feelings and projecting these onto broad paradigms that have nothing to do with larger trends from the world as it has existed.
4. Now that you have students in "critical theory" mode, where they are accustomed to perceiving aimless opinions as serious intellectual work, and they have lost the ability to memorize facts or past texts, you throw them into discussions about race. Since race is a sensitive topic, minorities are largely aggressive while whites are largely defensive or apologetic. The more tension and strife this fruitless discussion causes, the more people feel that some important work is being accomplished, when there has been no expansion of knowledge whatsoever.
5. Now you have brought students to critical race theory. As they begin to notice that conversations are shallow and repetitive, you create the illusion of sophistication by reproducing the same discourse with race replaced by gender, sexuality, class, or other identities that actually have nothing to do with race.
The overall ignorance, futility, and delusion of this entire exercise is terrible for minorities, who have been systematically deprived of a deep education about their own cultural heritage while also being forced into a contemporary political position that has little to do with their human identity. Since minorities have often been exploited, uprooted, and stereotyped in the past, critical race theory furthers more of the same abuse even though it appears on the surface that minorities are given sympathy and attention.
Reading African American literature is actually the opposite of critical race theory. If you read the texts, you give students the tools to build their worldview. As their tools become more varied, they will be inclined to think critically about whatever is presented to them. You don't teach critical thinking or worldview to students. You teach them history and literature then let them grow into the thinkers they will become.
If you worry about critical race theory --as you should--you should be on the lookout first for changes in seminaries that lead people away from specifics, away from history and literature and art, toward theory, abstraction, generalization, and open-ended conversation.
By Tejano - November 20, 2019

5 SHORT VIDEOS ON THE EQUALITY ACT--YOU SHOULD OPPOSE IT!

In case you need to be walked through the specifics of the Equality Act and why it is so crucial to block its passage, I have made five short videos here, walking through the specifics of (1) the preamble of the bill, (2) Sections 1-2 on "findings," (3) the bill's redefinition of "public accommodations", (4) the bill's warping of the racial history behind desegregation of public accommodations, and (5) the bill's abuse of educational institutions and the ways it would force schools to protect predators and disruptive students to the disadvantage of vulnerable students.

PART 4: The Abuse of the Racial History of Desegregation

PART 5: The Bill Will Force Schools to Allow Predators and Disruptive Students to Harm Vulnerable Students

Hearing D.C. McAllister's Side of the Story

The firing of Denise McAllister, known as D.C. McAllister, from Daily Wire and the Federalist, was an obvious blow to many conservatives. Here we see a strong conservative voice with a lot of pop culture appeal driven off two platforms often known for defending free speech. It was my great honor to interview Denise and get her take on it all.


You can here it on Soundcloud or by video:

Take a listen at https://www.bitchute.com/video/Dm5bfZ3A4VEq/ or below: